First off, I just wanted to say THANK YOU to everyone who played the game. I hope you enjoyed it! Please let me know what you thought in the comments, or on Twitter! The number 1 reason I make games and stuff is for people to enjoy them.

Secondly, I want to say that if you enjoy this game, please take a look at my other games, and consider donating or purchasing what I have for sale, or even just spreading the word to your friends. I don't like to be too self promotional, but having your support is the only way I can keep on creating cool stuff, so I really appreciate it!

I thought I would post a bit of a FAQ/Q+A thing here to tell y'all about this game, and a bit about myself. I hope it's even a little interesting to people. If you have any questions I didn't cover, please leave a comment!

❔ How many people worked on this game?
🅰 Just 1. Me. Myself. I did enlist my daughter to play-test and make sure the puzzles weren't impossible, and I got some feedback from some friends and fellow game developers, but I did everything (design, code, art, music, sound editing, etc) on my own.

❔ How long did it take to make?
🅰 According to my repository log, my initial commit was on January 9th, 2020. I uploaded build 1.0.0 and released it to the public on February 3rd. So, a little bit short of a full month?

❔ What was the inspiration for this game?
🅰 Besides just the fun and humorous antics of the Chilluminati boys, I was inspired by Airdorf's Faith series and Maniac Mansion.

❔ What tools/programming languages did you use?
🅰 The game's code is written in Haxe (using the Free+Open Source Game Development Framework HaxeFlixel). I coded in Visual Studio Code, used Adobe Photoshop for the art, BeepBox to make the music, Bfxr to make some of the sound effects, and Audacity to edit all the sounds/music.

❔ What's with the pixel art, screen resolution, color palette?
🅰 I wanted to give myself some constraints on the look/feel of the game. The idea was to 'pretend' that the game was for an older console or PC that had a limited resolution and color choices. I stuck with 160px x 120px for the resolution, and usedDawnBringer's 16 color palette - with NO alpha channel - for all the artwork. Surprisingly, these constraints were actually pretty freeing for me. I'm not actually very good at art, so, being 'forced' to work really small and with limited colors kept it simple and I was able to quickly try things out until they looked 'good enough'.

❔ How long have you been making games?
🅰 I've been making games since I was real young - like 4 or 5 on - using my dad's Commodore 64. When I realized sometime in the 90's while in High School that people made games as a career, I planned to do just that, but life happened, and having to pay the bills, so I didn't release my first 'real' game until 2009 - and even then, it was just a Flash game. I've made a TON of little games since then, though - especially from things like Game Jams, andLudum Dare.

❔ Where are you from?
🅰 Born and raised in St Louis, Missouri.

❔ Why an Axolotl?
🅰 Long story short, when I decided to break away from making games for other people (and the arguments that created) and start my own company in 2015, I was struggling with a name and identity for it. One morning, while driving my daughter (7 at the time) to school, she turned to me and said: "You know, I think axolotls are cool. What if you used one as a mascot for your company?" So I did.

❔ Why make a Chilluminati game?
🅰 These boys have been an inspiration to me since they started the podcast. I had already been a huge fan of Alex, and enjoyed a lot of Jesse's content, too (I hadn't heard of Mike before the podcast, sorry), but even after just the first episode, I was hooked!
I'd been in the middle of a project that was taking way too long to complete... waiting on other people on the team to get stuff done, and not feeling especially motivated, creative, or accomplished, so I decided to try to make a game quickly, and entirely on my own (so I didn't have to deal with anyone else) just to try to get those creative juices flowing again. Not sure what sparked the idea, but I thought it would be cool to have the boys in their own Scary Game and it kind of took off from there!
I'm still riding the high of just having released the game, so it still remains to be seen if it helped, but I had a lot of fun working on it!

❔ Have you ever met the Chilluminati guys?
🅰 Not to brag, but, YES! I got to see them all together at Indy Pop Con a couple years ago. My daughter and I even got to hang out, fail to escape an escape room with them, and eavesdropped on Kylo Ren arguing with his dad over the phone to let him buy a new Lightsaber. Pretty rad! 🤣 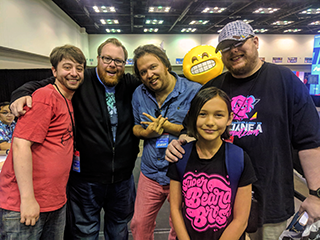 Get Heck House - A Chilluminati Adventure

A game about some spooky podcast boys.