A downloadable game for Windows

The realm is under siege!

Monsters and the denizens of Evil have spread across the land, driving citizens out of their homes and chasing innocent people into hiding!

Bristling with weaponry and items, there's just one thing left to say to the forces of Evil: BRING IT ON!

Bring It On! is a single-player auto-attacking 'monster'-hell shoot-em-up survival game. Take on MASSIVE hordes of monsters across several locations, earning experience points to level up and acquire new weapons and items. Can you survive long enough to bring out the Mid-boss and Boss of each area? Can you find and recruit all of the other fighters scattered across the land  to your cause?

Note: This game is in EARLY ACCESS! It is still being actively developed and, as such, the current version does not reflect what the final product may be.

We will be updating the game continuously, and ask that you provide feedback to help us shape this game to be the best that it can be.

By supporting the game in Early Access, you are helping support the development of the game, and helping us pay our bills and things.

You may notice a sort of similarity between this game and another popular game. It is true that this game's development was inspired by the game Vampire Survivors by poncle

We wanted to see if we could make something similar, but different - to see if we could capture some of the fun elements of that game and then expand on them and see what kinds of challenges and/or obstacles such a project would create,  and then overcome them.

This game is not intended to be a copy, a rip-off, a reskin, or an attempt to trick people into buying this game instead of the other one. We have dedicated real time, energy, resources,  and money into making this the best game we could make,  and trying to come up with our own version.

That being said, it is understandable and inevitable that we will be compared to that other game.

We only hope that this comparison can be seen as the flattery that it is intended and not something nefarious.

If you like this game, please consider supporting Vampire Survivors as well - and tell 'em Axol Studio says 'hi' 😉

Base Sprites by Oryx Design Lab 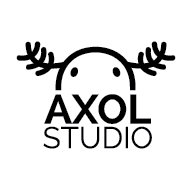 In order to download this game you must purchase it at or above the minimum price of $2.99 USD. You will get access to the following files:

Just stumbled upon a unforeseen circumstance:
Simultaneous dying and gaining a level causes the game to break and loop. Mobs are spawning, the ending message box disappears and the character is gone.
The only way to get back is by ESC > Restart or Exit.

Apart from that I am going for my last 64 EXP in order to unlock the knights special skill :)

The time needed to fully complete a character feels exhaustively long compared to the EXP gained. How do the others feel about it?

Hey ty for the games bro, i just hope u get better days the rest of the year so, again ty and its great that u face this bad situations in a good manner keep doin

I died the first time I played because I had no idea my health was so low. If there could be a health indicator bar right above or below the player that would be very helpful, especially on a Steam Deck where your face is so close to the screen. I also don't see any indicator of when your armor is recharged so I don't have any idea when it would be safe to take a hit or not.

I understand this is early access, but is there really no win condition? I know my way around a Survivor-like so the second time I played I was a lot more cautious about my health early on and prioritized upgrades a lot smarter. I was surprised that it took more than 45 minutes to max all the upgrades. That's really long for a single Survivor-like session. I was even more surprised when the clock got past 59:59 and rolled back down to zero. That's when I realized there was no end. Which was disappointing even if it's in early access.

I know from other Survivor games that if you don't win or die your progress doesn't get saved, so I assumed that's true here too and killed myself. The end game screen said mini-boss and boss were killed, level completed "No". But then looking at the achievements it said level 1 was completed, so I'm confused.

I also didn't get any unlocks that I can see, so what do you have to do to unlock a character? I played over an hour straight in that level and was getting the same wave of enemies endlessly for quite a while. I don't think I even saw another new enemy type after the big red knight died. It's very unexpected that wouldn't unlock anything.

Speaking of that red knight, it looked like he dropped something when he died but I don't know if I picked it up or not. Immediately when he died I got a level up. After I chose what to upgrade, whatever the knight dropped disappeared so I don't know if I got it or not. What was that supposed to be? Oh yeah, what are the maps that drop sometimes supposed to do? That and exactly what Luck does are the two other things that are unclear.

Sorry for asking so many questions. I do understand it's in early access, and I will say it's already more fun than some other Survivor-likes I've played.

Defeating the second boss should drop a map that ends the level and unlocks the next level.

If that didn't happen, that's a bug that I have not seen. Maybe has something to do with leveling up with the exact same time is picking up the map and it overrid something but I'll have to look at that. Sorry about that.

As far as progression and unlocking characters, every level has a hidden character available to find in it. It has a chance to spawn as you move around the map, but it's not guaranteed every time you play. Your luck stat increases the chance of it. Spawning as well as increases the chance of things like crits and more experienced dropping from enemies and so on.

I do plan to eventually add an in-depth guide/ dictionary in the game to explain a lot of these nuances.

Unlockable character should have an outline like the elites and the bosses do. And after you defeat one they drop a crystal that unlocks that character when you pick it up.

Also each character has five talents that you spend the soulstones you earn at the end of the level to upgrade. Each character has a mastery skill which is unlocked by upgrading all five of their skills to make level. Some of the characters mastery unlocks a new character. Others add a new weapon to the pool or something.

So in general the gameplay loop is sort of designed to be:

Try to find the hidden unlockable character by exploring more and more of the map and not just stay in one spot.

Defeat both bosses in that level to finish the level.

Spend soulstones on upgrades to eventually master the character.

Currently besides the Knight, there are five other characters in the game. Mastering the characters to unlock some of them is meant to take some time/effort.

Thank you for your feedback and I'm sorry about the bug.

Hopefully that bug is so rare that you don't happen to get it again. Like I said I had not heard of it and not seen it myself but I will look into it.

I have a lot of changes planned for the presentation and some of the inner workings of the game. I just need more time to refine some things before I get the next release out.

You're right about making it your own and expanding on the concepts. I like this more than VS because of the interesting features like ranged enemies and terrain. It was also cool to see at least one boss change behavior based on remaining HP (or time or something). There are a few problems, though:

Thank you for the feedback!
This game is still a work-in-progress. One of the things that has been implemented (but not yet released) is a complete overhaul in AI pathfinding - enemies get "stuck" inside walls almost never, and they will try to work their way around obstacles to reach you instead of just getting stuck in corners.
Trying to find a good balance of difficulty is tough - each of the ~6 characters in the game play totally differently, but the intent was to always make the Knight character be the 'introductory' character and have him be easier (especially for new players) in the early-game to let people get used to the game and everything - but, he doesn't scale up as strongly so that he ends up being underpowered in the later levels, giving players an opportunity to break out the other characters who might be more powerful or at least have specific strengths for specific challenges... (well that's the INTENT anyway... whether it ends up feeling like that in the end is the hope).
The next update is being worked on. It's turning out to be a lot bigger in scope than previous updates but I will add the other issues to the list to check out.
I hope that you can keep enjoying the game as I keep adding to it and refining things - and can experiment more with different characters/levels/builds.
Thanks again for playing - please tell your friends to check it out, if you want :)

Interesting variation on Vampire Survivors. Looks ok so far, my main issue though is that the game spikes and lags for a while every time I gain a level. 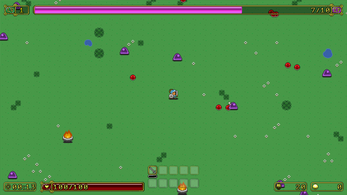 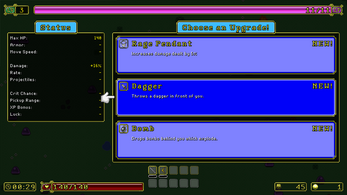 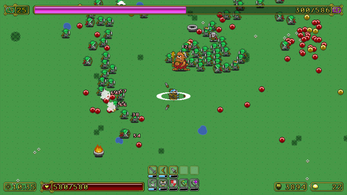 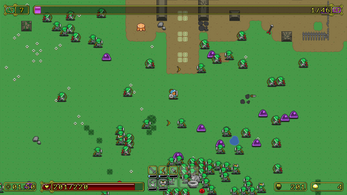 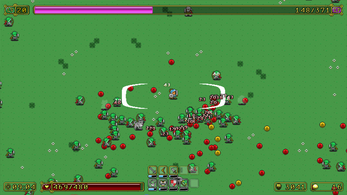